If you’ve been following our articles since 2015, you’ve probably come across our previous Manila Bulletin interviews with the very first Forged in Fire champ hailing from the Philippines. Well, after almost two years since my online interview with him during Christmas Eve of 2015 (Yes, news does not sleep), we finally met in person!

Ryu Lim was still as accommodating as he was during the end of the first season and he’s really good at remembering names. We need not to introduce ourselves anymore during our turn to throw in our questions and that just made our quick interview something really worth remembering (Little things, you know?). You won’t get the chance to casually talk to a professional bladesmith every day.

Here are clips of Ryu from History Channel’s History Con 2017 Day One:

For those who prefer to read, you can find the full transcript below.

Ryu has been practicing bladesmith at his hometown – Arayat, Pampanga, since he was nine years old. He left the country with his father at the age of 13 and continued to practice his craft in the United States. Prior to his Forged in Fire stine, Ryu became known as a “nomadic blacksmith” since he never stays in one place for too long.

The show is an original competition series featuring world-class bladesmiths competing to create history’s most iconic edged weapons. In each episode, four of the nation’s finest bladesmiths come together to put their skill and reputations on the line, trying to avoid elimination and win the $10,000 prize. Ryu emerged victorious in the first season, outshining the work of foreign contenders.

This year, he returned to his homeland to conduct “live” demonstrations on the test of blades forged by some of the best local artisans and bladesmiths in the country. If you want to see it, just visit their booth at the World Trade Center and watch out for his stage appearances this weekend. 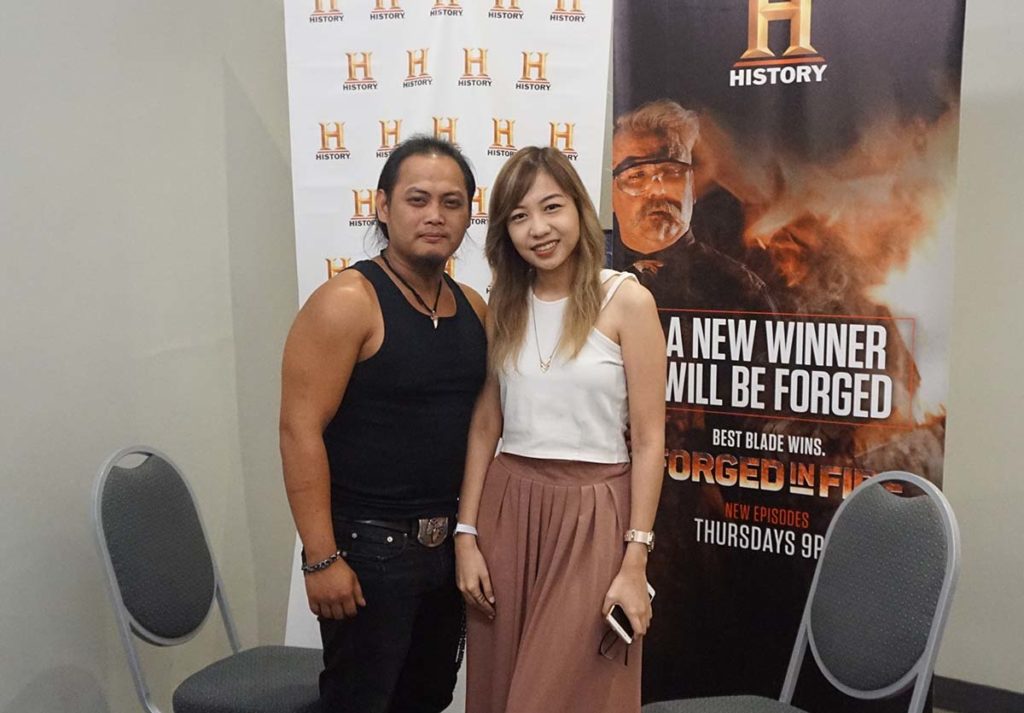 Fun Fact: “Ryu” means “dragon” and “Lim” means “forest”. Indeed, Ryu was able to live up to the meaning of his name. A true “Dragon of the Forest”, a panday who has spent much of his time camping in the wild!

Forged in Fire is current on its fourth season, with new episodes every Thursday at 9 pm. There will be new challenges and special event episodes that set the bar of competition-bladesmithing to unimaginable new heights. Fan favorite bladesmiths are also set to reappear for a second time!

Read more about the History Con by visiting the following links: 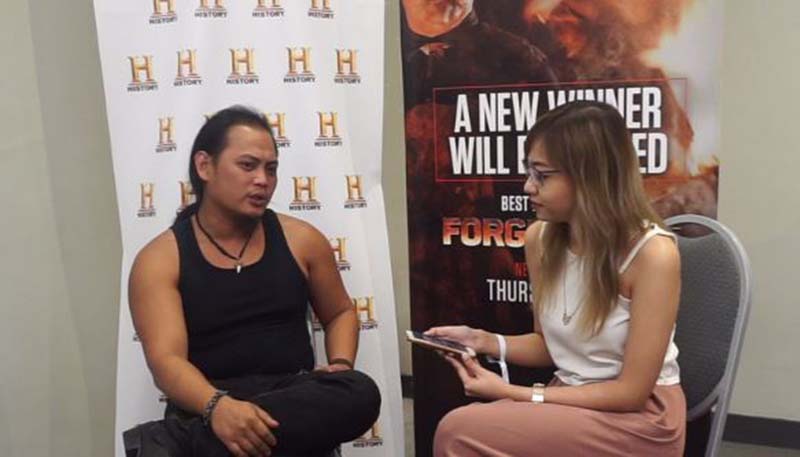 How does it feel like to be a celebrity after your stint with Forged in Fire?

“I don’t really feel like a celebrity. I mean, I don’t even know what I’m doing here but I’m glad I’m here. It’s nice to meet everybody, be recognized for my art and not for anything else. It’s something that I love to do and being recognized for is great for me. I feel good about that.”

What should aspiring blacksmiths do to become the next Ryu Lim?

“Keep practicing, don’t worry about errors, don’t be afraid to make mistakes. Use mistakes to move forward. Learn from it, don’t get frustrated. Use that to encourage yourself to become better.”

“You would need a forge, some kind of an anvil, a hammer, and last one would be vice grips… and a beef jerky”

“Yeah. It never comes off even if I take it off,” he jokingly says. “It’s actually more for practicality. I want my arms to move freely and wearing sleeves creates a lot of friction for me. Unlike many other makers where they would forge for a few minutes at a time or maybe a few hours, I would be forging for a whole day. Sometimes like 15 hours, no more in a day. ‘Cos I do all my forging by hand and wearing no sleeves is more of a practical thing. And I sweat very easily when I’m working cos all the heat and intense work, so I’d rather… actually, most of the time when I’m forging, I don’t wear a shirt! But when people are watching, I have to put on something but the least amount of clothing.”

“I like to wear black because I can’t wear white. They expire very fast for me. They stay white for a few minutes and then I ruin them. I work with a lot of things that make things black – like coal, all the dirt – so if I wear black, I don’t look that dirty, I guess. It’s more presentable because I get a lot of people who visits me and wearing black is just something I’m very comfortable with. It hides how dirty I really am. I guess.”

Which blade shape is your favorite for a knife and why?

What’s the best EDC carry-on brand that you use?

“Brand of production knives? I use my own knives, I carry my own knives. I like to carry my own knives because it teaches me a lot of things. For me, that’s testing them. I use knives everyday especially now that I moved in the mountains. I have to chop wood all the time, I have to cut down branches, process meat, and carrying my own knives give me an opportunity to test the blades firsthand and the results of those testings gives me better ideas. It improves me, so that’s why I don’t like to carry anyone else’s knives but my own.”

“I like the Ryu Lim brand. I heard it’s pretty good.” 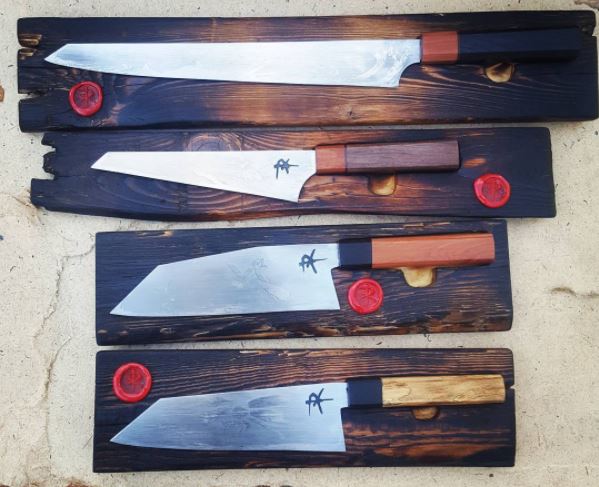 What type of steel is your favorite?

“My favorite steel is ATCRV2 from New Jersey Steel Baron. Highly functional, it’s a very tough steel, it has high carbon, and a good amount of chromium for rust resistance. It’s not stainless, it will rust but if you take care of it properly, it should serve you really well. It’s a very easy steel to work with and you don’t have to overcomplicate the process. You can stick with what you know, the steel that you know, and keep improving at it because there’s so much science into developing these steel that perfecting them takes time. You don’t need to rush into complicated steel. You can go simple and make it work. Don’t worry about using super steels and overcomplicating it for yourself when you have to focus on your own design. 80CrV2 is good for a lot of things, a lot of very tough and durable and it stays sharp and it’s very easy to sharpen. I like it.”

When did you start collecting blades?

“I’ve actually been making blades for as long as I can remember. I started forging when I was 8 or 9 years old but before that, I was already making blades.”

How many do you currently own?

“I don’t have a lot of knives actually. I can’t afford them. I probably own less than 15 on my own knives.”

Do you have a most cherished piece?

What is a perfect knife?

“There’s no knife that’s good for everything. You gotta use a knife for its intended purpose and you have to make them for those purposes. There’s no ultimate, magical knife.”

From an avid fan: What did the firefighters say when they found out about your improvised forge when they were called in by your neighbors in Season 1?

“They couldn’t believe it. They didn’t know what to say. They said they’ve never seen anything like that. They don’t know how to feel about it. They wanted to shut me down, at the same time, they thought it was really cool so I made it pretty difficult for them and then before they left, they wished me luck so that was nice.”

“I don’t have any workshops that are planned right now, but I’m hoping to do more of that stuff and basically make the blade culture more familiar to more people. When I encourage more people, I definitely wanna do more workshops if I was given the opportunity but right now, it hasn’t come up yet. It’s always at the back of my mind but there’s no schedule right now.”

Special thanks to the following people who sent in their questions for Ryu: