Who would have ever thought that comedy and family values can be part of a (literally) bloody series? Apparently, the brilliant minds behind Santa Clarita Diet came up with that concept for Netflix in 2017. The first season was so good that they’re now back with a crazier second season!

To officially launch the second season and personally thank their fans, lead actors Drew Barrymore (who plays Shiela Hammond) and Timothy Olyphant (Joel Hammond) flew to Manila to join the red-carpet premiere last Monday (March 12, 2018) at the SM Megamall Fashion Hall. To manage your fear of missing out, here are key takeaways and photos from the event: 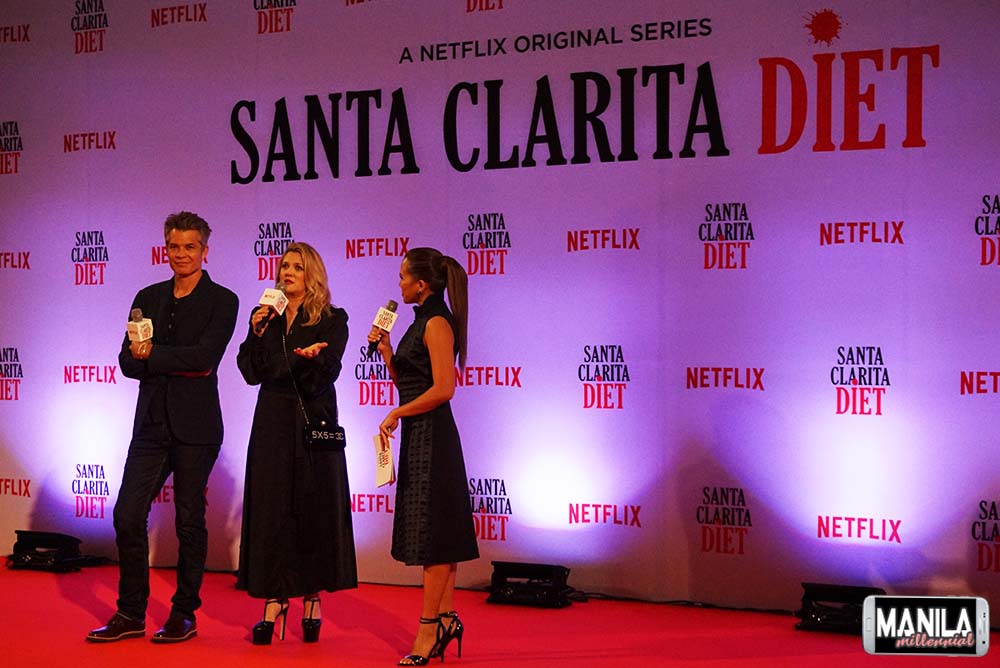 Decaying bodies, gushing blood, and stressful scenes would probably be the top of mind when someone says “zombie”. However, Santa Clarita Diet’s zombie is an adorable one that would make you want to stare at the screen longer even though blood is already everywhere.

“We try to kill bad guys. There’s like morals to what we’re doing, I hope. I think at the end of the day; the show is about a family who is trying to stay together and make it work, and I think that is relatable to any couple on the planet… It’s an optimistic and funny and happy show about this couple who had such great circumstances going on around them. They still find a point to live their normal daily life. It’s a family show,” Drew exclaimed.

To which Tim half-heartedly agreed: “I agree, if you put aside the blood.”

They’re just so cute together!

WE ALL LOVE DREW (AND SHEILA) 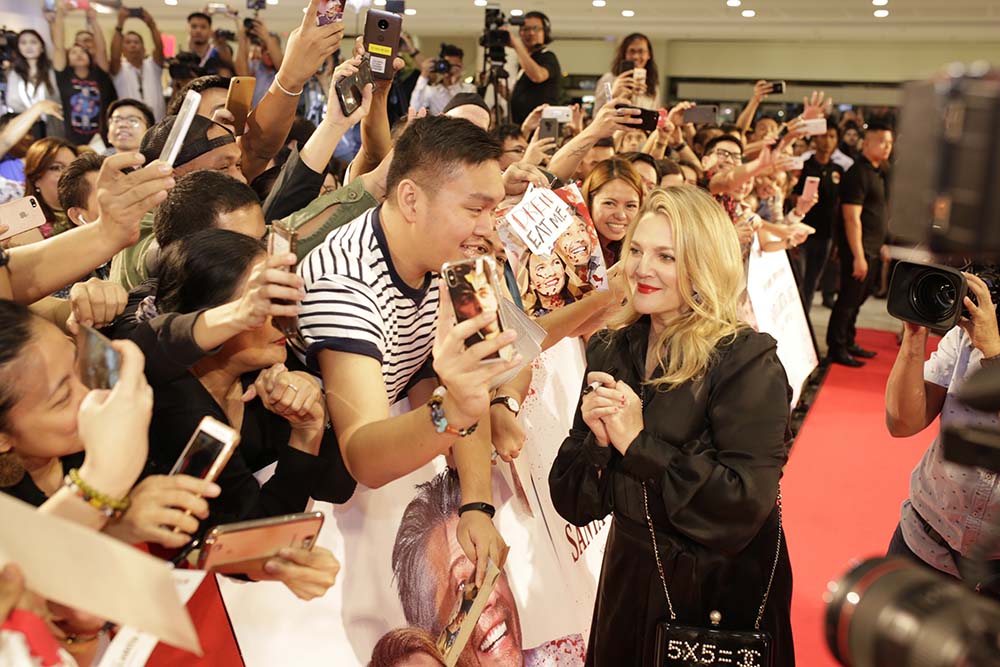 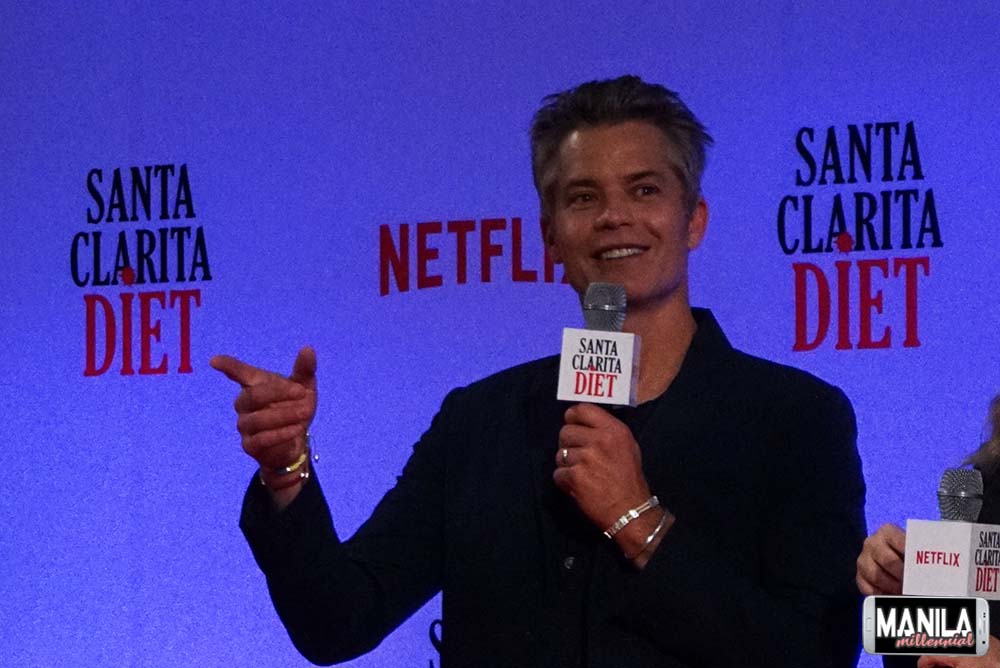 “First of all, I want you to know that if my wife starts eating people, I would leave her. But in the show, I’m right there. The whole thing is a blast,” Tim mentioned when asked about his favorite behind-the-scenes experience. “I work with her but you can tell, she’s a dream. Drew makes the job really easy.”

This is not a surprise since we all know how long THE Drew Barrymore has been in show business. Fun fact: She’s been involved in projects as early as 11 months old!

THIS IS A WAKE-UP CALL 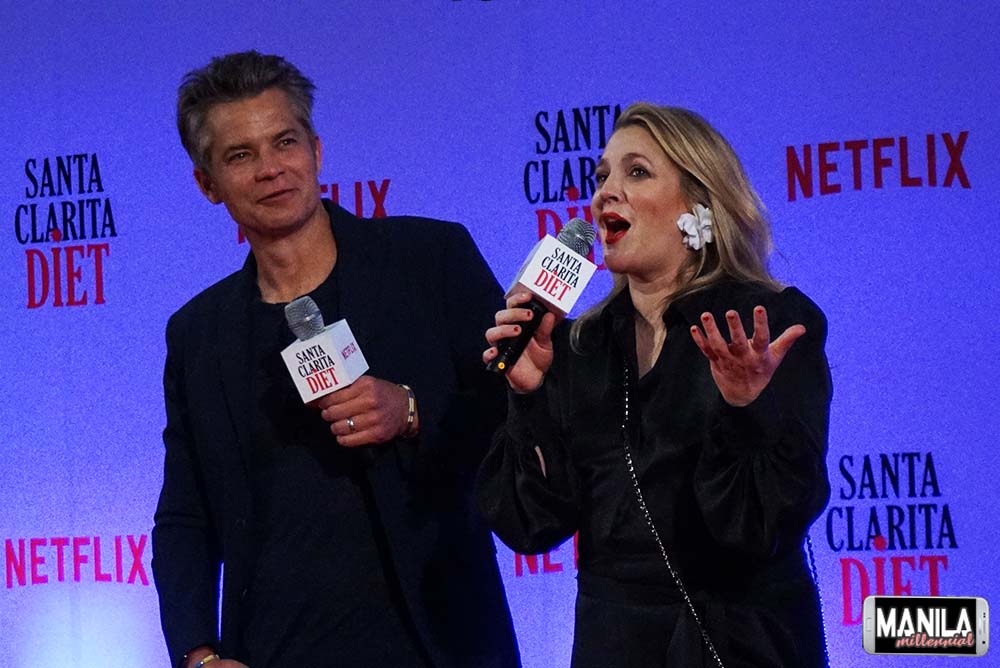 How can a zombie story become so relatable even though we don’t eat humans like Sheila? According to Drew, this is part of a metaphor.

“[Sheila] was just walking through her life a little bit dead anyway. So really, this is her wake-up call. I lost 20 lbs during the show, I had a wake-up call myself… She is living her best life and sometimes in our life, we need a kick in the ass – a wake-up call,” explained Drew. “For her, it’s becoming undead and I think that this is a great metaphor for women. Sometimes we need to put ourselves back together and be healthy and be in a mind that empowers and is excited.” 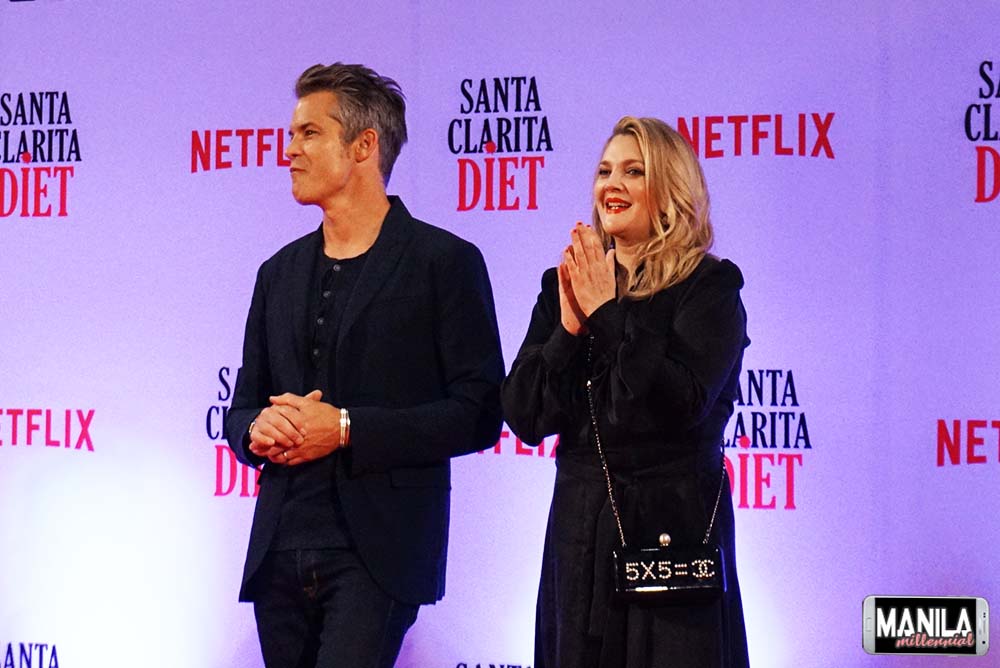 Both Drew and Tim have already been to the Philippines. Tim used to live in Davao since his dad worked for a local company, while Drew flew in for a business trip which involves her makeup line.

“I was here two years ago, actually met with the SM people because I want to bring Flower Beauty – my company, here. I hope very much to bring a company for the empowerment of women here,” explains Drew. We were not able to catch what the result of the meeting was, but we do hope to see her products on store shelves soon. 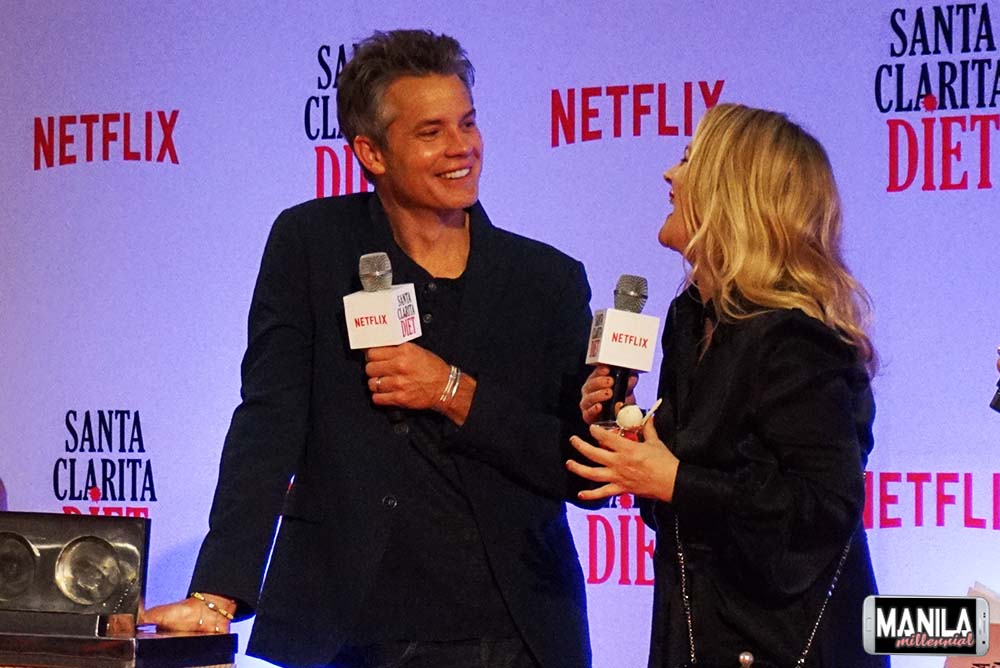 Amidst fans screaming their names, both Drew and Tim continuously said thank you to the crowd throughout their interview. They even sneaked in a few scoops of our popular Pinoy sorbetes with a “bloody” twist.

“Thank you so much for watching this show. I really hope by the end of the day, what it does for you [is to] make you laugh, take you out of your everyday problems. I love when something can do that for me and this is the new age of Netflix and content. We can just binge it,” said Drew. 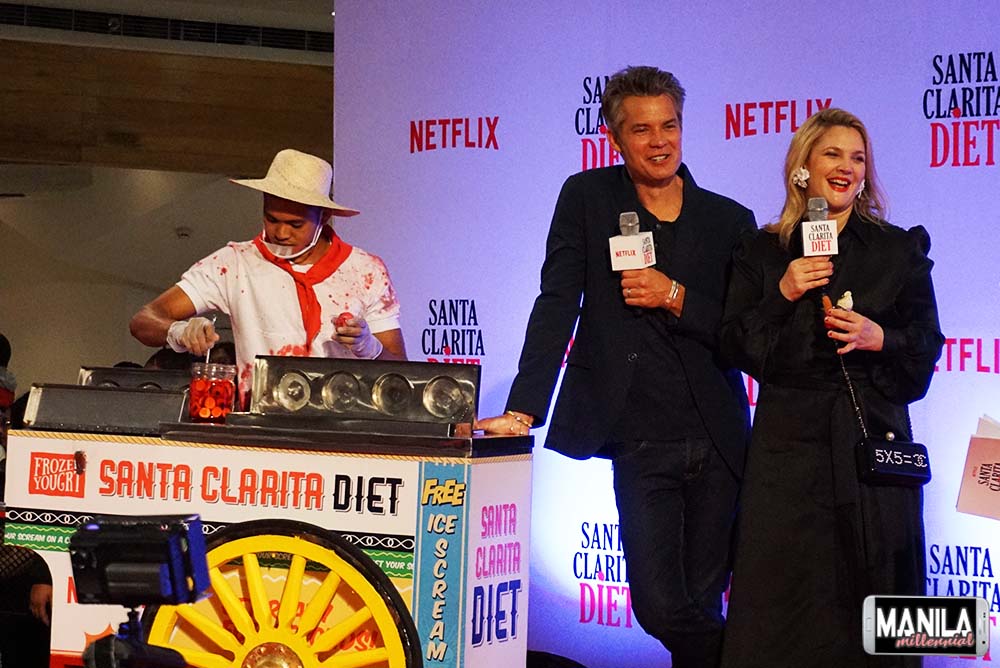 You got it straight from Drew Barrymore herself. Binge Santa Clarita Diet Season 2 on Netflix starting March 23, 2018. While it’s not yet available, feel free to watch a re-run of the first season or do a little catch up and breeze through the first 10 episodes of the show in one sitting. Read more about this series and watch the official trailer by clicking here. 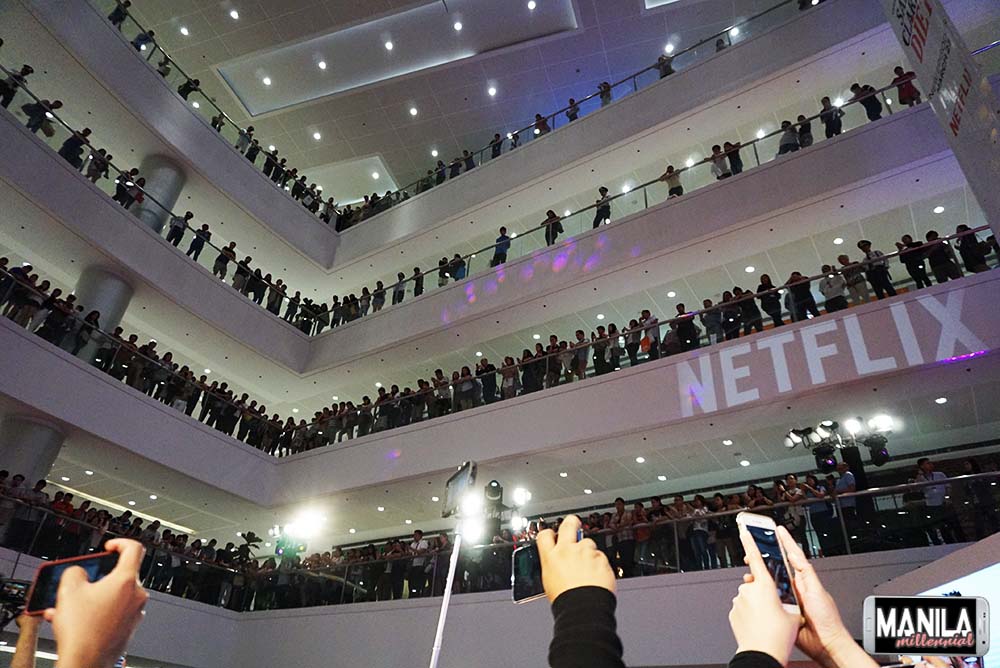 For more details and updates, visit: