Nothing beats the feeling of being able to witness an iconic production that has been around for about half a century but remains relevant until now. As millennials who aim to stay “woke”, it’s a must to see how important stories are told through musicals and stage plays like Repertory Philippines’ (REP) year-end grand musicale Hair – the first ever tribal love-rock musical on Broadway.

A cultural phenomenon that dives into the vibrant 1960s bohemian underground, the sexual awakening of a generation, and the politically charged atmosphere of the decade, REP’s version of Hair stars Markki Stroem alternating with Topper Fabregas as Claude – a native Oklahoma farm boy torn between pleasing his parents by signing up for the military and joining a free-spirited tribe protesting the Vietnam War. 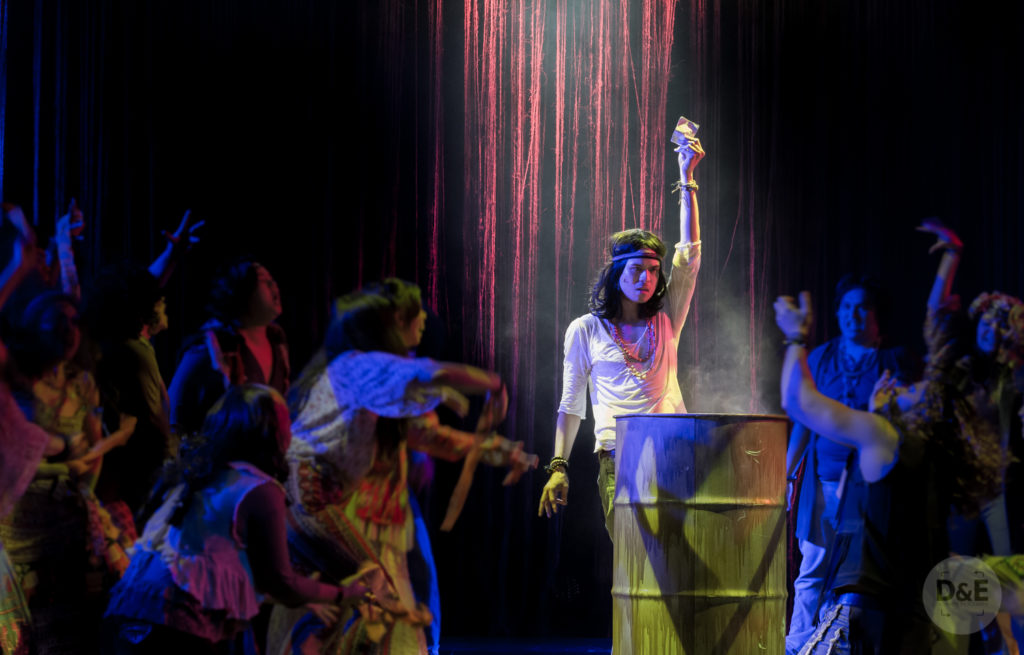 Watch these emboldened twenty-somethings as they learn to question authority and yearn to change the world in the harmonious age of Aquarius.

The frenzied band of hippies led by George Schulze’s charismatic Berger, along with student-turned-activist Sheila played by Caisa Borromeo, inspire Claude to rebel against the war and norms of society and embrace love, peace, and freedom instead. These phenomenal performers bring to life the award-winning book and lyrics by Gerome Ragni and James Rado, and music by Galt McDermot, whose amazing score has become a classic with hits like Let the Sun Shine In, Aquarius, and Good Morning Starshine. Songs like Electric Blues may have been written years back, but the message is something we can relate with up until now. Calls to end war and violence are not new to us, especially with the current drug war in the Philippines. 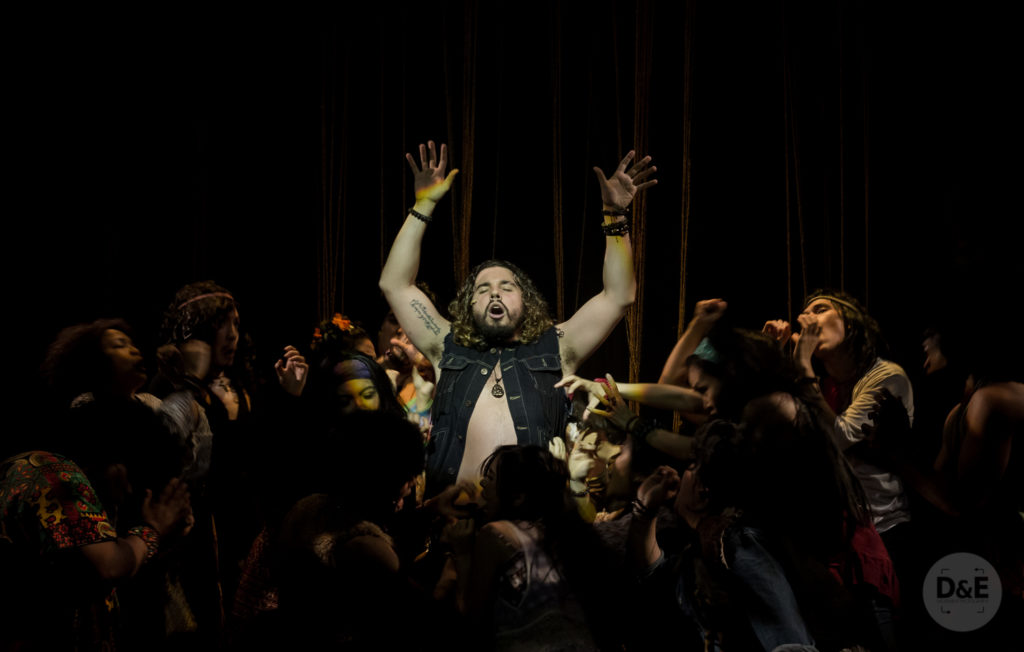 REP made the most out of their freedom to explore the nature of Hair, with a lot of arrangements revised in the vision of their Musical Director. There are currently 200 productions all over the world, celebrating the 50th anniversary of Hair, so the group made sure to get their message across by latching on a thematic thread.

“Hair traces its kinship with guerilla street theater. Unblinkingly tackling social and political issues raucously declaring its agenda in oftentimes archetypal dramatic fashion, wielding a heavy bias towards improvisation, collaboration, and spontaneous expression – all of these gestures are intrinsic to Hair and essential to performance. We agreed on ‘innocence’ as the thematic thread and the depiction of its poignant end the trajectory of the storytelling. Situated with events that led to the Vietnam war, the culture of racism in America, the disillusionment with the previous generation – what seemed to be American history and culture-bound issues of the 60s immediately engaged with millennial issues such as the new wars caused by intervention and ethnic cleansing, the return of conservatism and misinformation brought about by the digital age,” says Director Chris Millado about their tribe called Aquariyaaas! 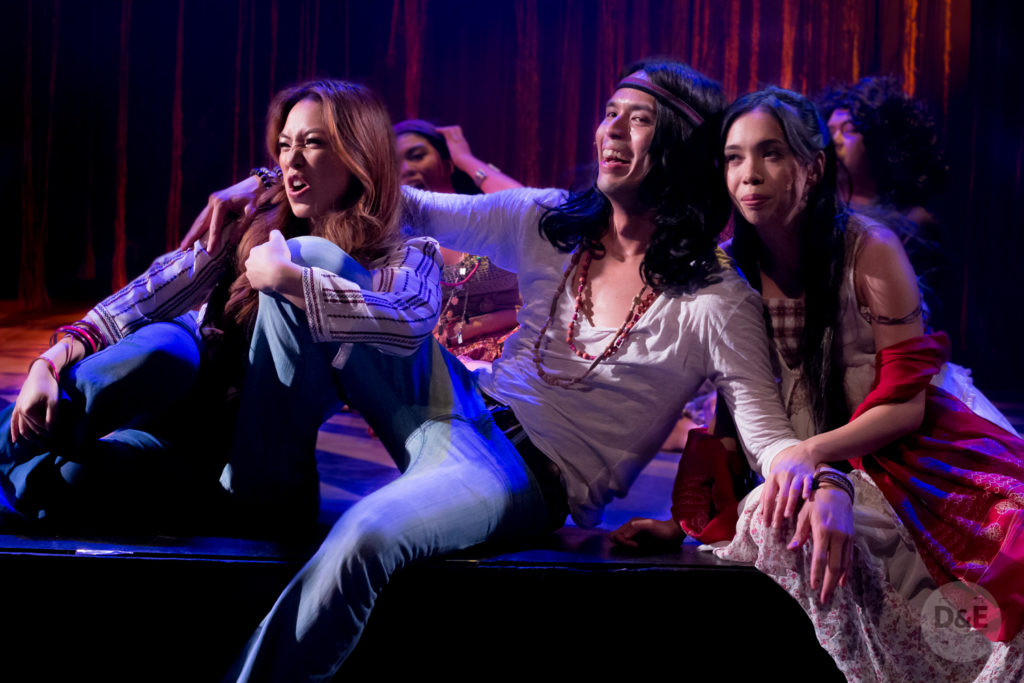 Sheila, Claude, and Jeanie in a scene from ‘Hair’.

“The ending – you can see this hippie dancing in the graveyard, it almost signals the end of the dream and almost puts the question ‘Was everything that these group of people, as idealistic as they were, did they achieve anything?’ and it’s a question that I think each generation asks of himself or herself. Especially a generation that fights passionately for a certain belief. How much of your struggle really amounted to anything? That was the difficult question that we tried to ask in our version of this production,” he explains during their opening night. 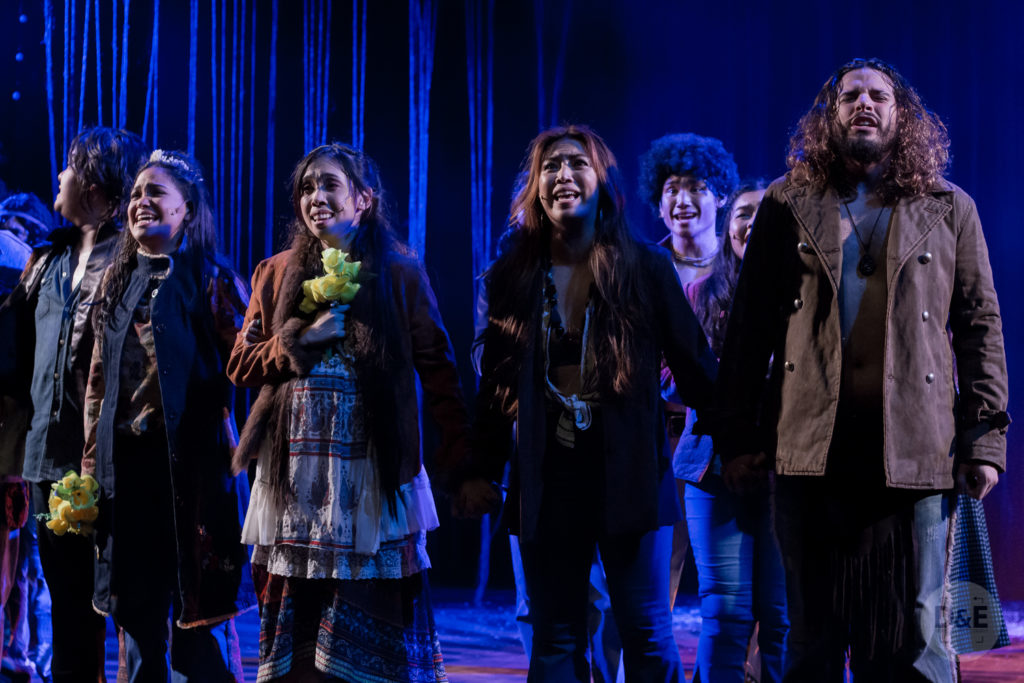 Repertory Philippines truly did an amazing job in this musical.

And it’s not only us, the audience, who thinks that Hair is something that also serves as millennials’ battle cry even though we’re way past the 60s. Even the cast members agree to this.

“I feel like history is repeating itself in the sense that there’s hatred and greed that it supposed to be outdated but it seems to be trickling back to what’s happening today. I think a lot of us can relate to that. A lot of the youth, a lot of people our age, millennials alike, have strong feelings of dissent towards the ills that are happening now in the world. The similarity that we share with what’s happening back then was we want to end racism, we want to end hatred, we want to end oppression. People like us, we want everyone to be equal. The difference now is that we have a digital battle to fight as well. Back then, people go to protests through word of mouth, but now, we have the Internet. We have an online battle against things like fake news, and we have so much information going around that helps educate ourselves with what’s happening in the world. It fuels our emotions so that we can speak up and act out against it,” said Maronne Cruz who plays Jeanie (one of our favorite characters, by the way). 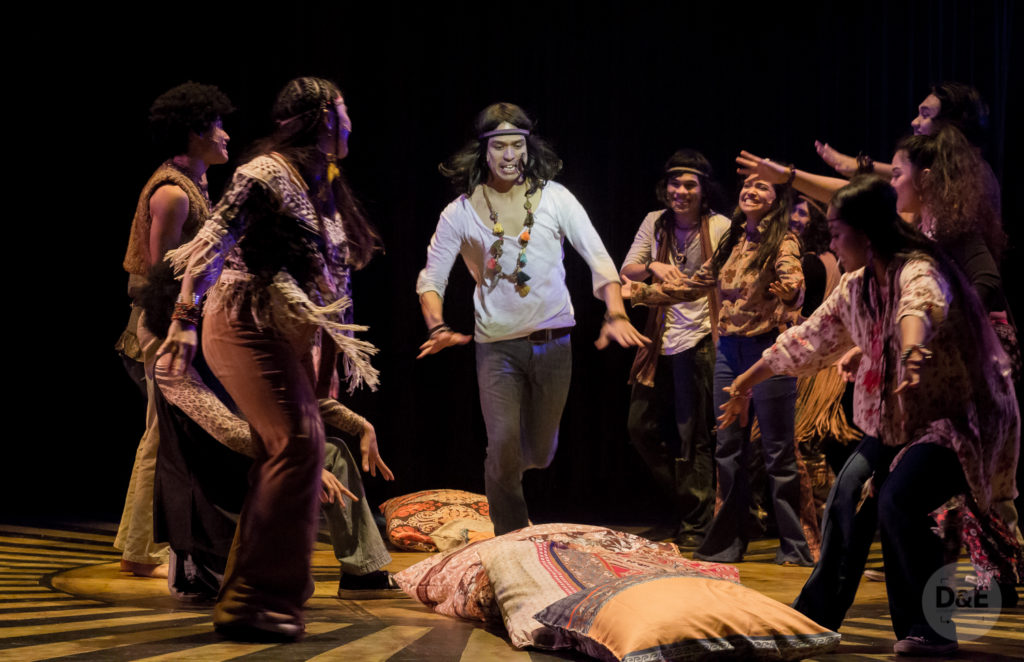 It was originally produced on the New York Stage by Michael Butler, winning the 1969 Grammy Award for Best Score from An Original Cast Show Album, and earning the Tony Award for Best Revival of a Musical during its 2009 Broadway Revival. In 2017, it’s currently set to charm our hearts back to the 60s. 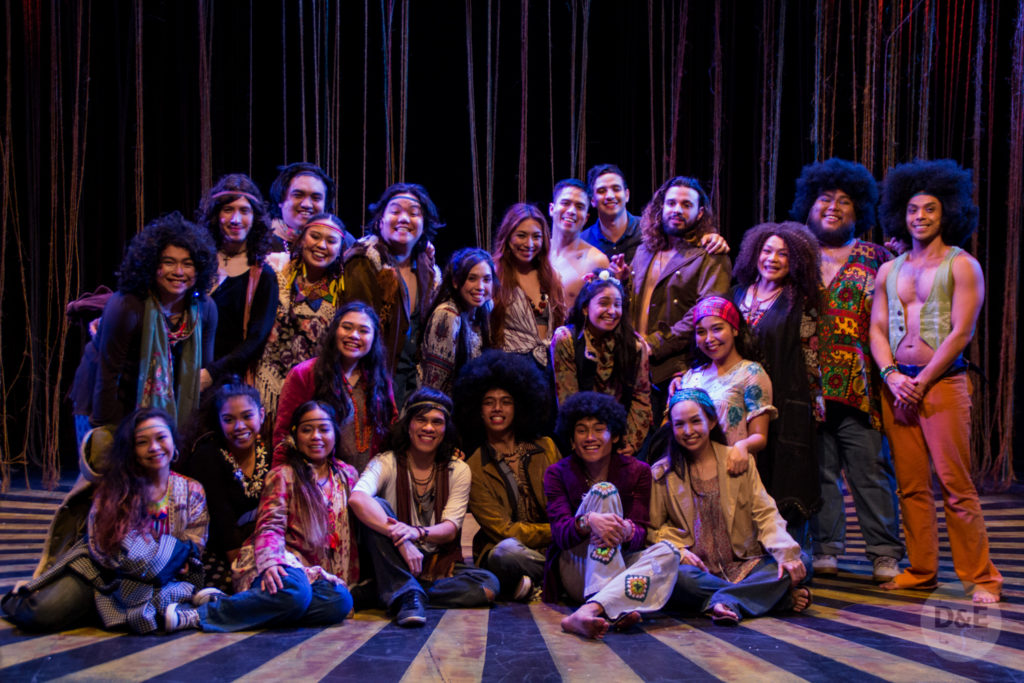 Of course, we brought our theater-savvy millennial friend with us to give her two cents about the entire play.

Mai the Millennial says: “I was initially taken by it because I love the 60s – the music, the fashion, the advocacy. I love it! I had no idea what it was about. After the show, I was completely in awe. It was spectacular. Admittedly though, I’d have to read up on it to fully understand what I just watched. What I loved about it the most is the rawness of the emotions and how they portrayed it. I’m curious kung saang personal experience nila hinugot ‘yung emotions nila to be able to relate to their characters. Ang galing!”

Whatever generation we may be in, what’s important is that we stay “woke” and aware about issues that need our action. With information readily available at the palm of our hands, it should be easy to look back at mistakes that we should avoid repeating in the present time. It’s an eye-opener and a must-see musical from REP that millennials should definitely watch. 10 out of 10 stars! #MillennialApproved

“It’s a great time to be young. Use your voice for something good.”

Catch these emboldened twenty-somethings as they learn to question authority and yearn to change the world in the harmonious “Age of Aquarius” from November 17 to December 17 at the Onstage Theater, Greenbelt 1, Makati. 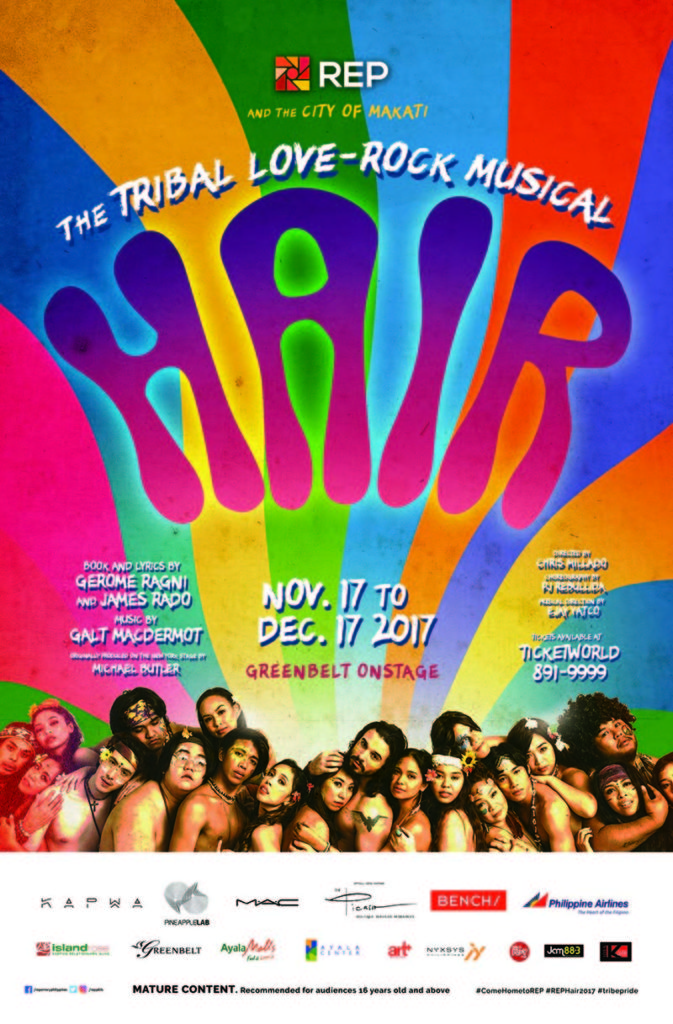 Join the tribe and purchase your tickets: