Emmy Award, Golden Globe Award, and Grammy Award nominee and Critics’ Choice Award winner Zooey Deschanel cemented her place as a mainstream presence with a handle for nuance when she re-introduced the classical leading lady to the modern audience with her old-fashioned charm in her starring roles in 500 Days of Summer and Yes Man. Who could ever forget this New Girl on the block?

We didn’t expect the lovely Zooey Deschanel to look like this! But she still sounds adorable, though. (Trolls/ DreamWorks Animation)

Albeit having an appearance that is way more colorful than the childhood trolls that we know, the redesigned creatures star in a funny and irreverent new movie which is all about happiness, happiness, and more happiness. Anna Kendrick stars as the voice of Poppy, the optimistic and relentlessly positive leader of the Trolls. With their trademark, rainbow-colored hair and upbeat personalities, they are the essence of joy. Only one member of the community is sad — Branch (Justin Timberlake), a fearful and over-cautious Troll, is terrified that miserable monsters called The Bergens will find them. The Bergens are only happy when they eat Trolls, FYI! The Bergens are the flip side of the Trolls. These depressed giants believe that menacing Trolls is the only viable path to joy.

Given the Bergens’ king’s (King Gristle Jr. voiced by Christopher Mintz-Plasse) childish ways, it’s no surprise that he is unlucky in love.  But that status may change, if the Bergen scullery maid Bridget has anything to say about it.  Zooey’s Bergen is the sweetest and most kind-hearted in all of Bergen Town; in fact, she may be the only kindhearted Bergen. Bridget is sensitive and soft-spoken, and harbors a crush on the king. 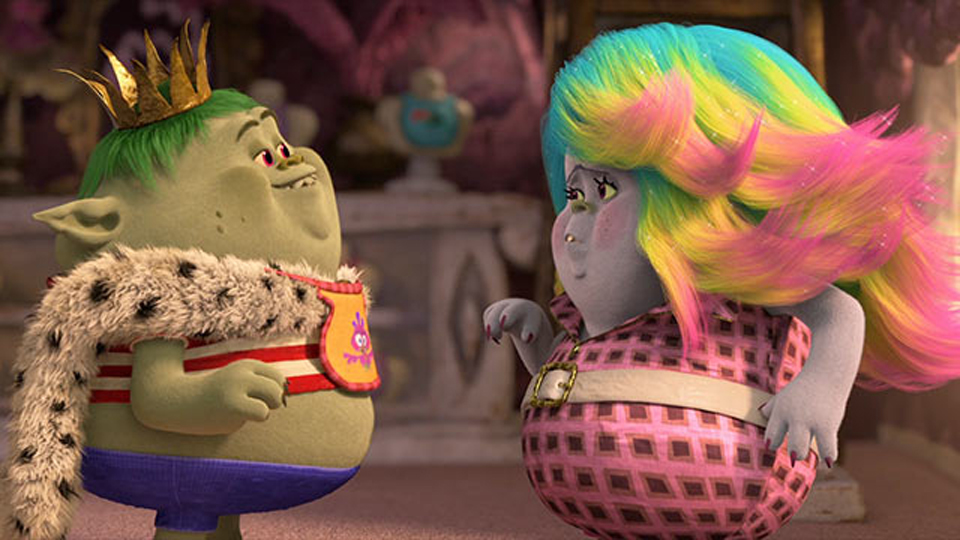 “She’s our Cinderella,” says director Mike Mitchell about the character.

Screenwriter Jonathan Aibel has a special affection for Bridget, a character he describes as being “a challenge to write, because when we meet her, she’s uncommunicative. So to see her grow and learn how to express herself is probably my favorite part of the movie, especially when she goes on her dream date with King Gristle.”

An entertainer in every sense of the word, Zooey sings Lionel Richie’s ballad, Hello, that underscores her character’s touching crush on King Gristle.  Additionally, Zooey was even asked to record a rap verse for a remix of Diana Ross’ I’m Coming Out.

She explained: “I didn’t want to screw it up, but the one thing I can’t do is that (rap). It was really scary, but Justin was a great coach.”

As her big evening with Gristle unfolds, Bridget gets help from Poppy and her friends, who not only provided the maid with rainbow-colored tresses made from their own collective hair, but even helped her to converse with Gristle.

Fun Fact: Hair is a defining aspect of the Trolls and their universe, and bringing its nearly supernatural powers to life fell to a specially created “Hair Task Force,” made up of hundreds of artists and technicians working only on hair effects, ensuring that this magical thing was always looking—and acting—fabulous.   All that hair-raising derring-do didn’t come easily:  the Hair Task Force created a total of 1.8 million strands, with Poppy taking 84,000, Branch almost 50,000—and Bridget taking the furry crown, using 237,375 strands, with help from Poppy and her pals, of course.

Let your hair down and let the happiness flow when Trolls opens on November 2 in cinemas nationwide from 20th Century Fox to be distributed by Warner Bros.

As huge fans of Zooey, we can’t wait to hear her and watch her Bergen-ified version on the big screen! It sounds soooo fun and very much like her!

Watch out for our Gen. Z Correspondent’s review of this movie here on Manila Millennial. We’ll keep you updated via Facebook. Don’t forget to hit LIKE!