Are you a watcher or a player?

Industrious high school senior Vee Delmonico is tired of living life on the sidelines. Pressured by her friends, Vee decides to join Nerve, a popular online game that challenges players to accept a series of dares. It’s not long before the adrenaline-fueled competition requires her to perform increasingly dangerous stunts. When Nerve begins to take a sinister turn, Vee finds herself in a high-stakes finale that will ultimately determine her entire future.

In case you’re feeling unsure whether Nerve is worth watching in cinemas, here are 10 reasons why millennials (and millennials at heart) will love it:

1. No one can relate to the graphics and OST more than the millennial watchers

Pretty sure you have seen a similar pop-up ad, clicked that desktop icon, and used that GIF featured in the movie. And that OST is so playlist-worthy! You’ll be able to relate to every single thing.

2. Emma Roberts (as Vee) stepping out of her comfort zone

And I don’t only mean Emma veering away from her usual alpha female antagonist role that she nails every single time. In this movie, expect to meet a pre-college character who acts very much like us or anyone we know who’s so done of being someone else’s shadow. The underdog’s comeback is real.

3. Dave Franco (as Ian) being himself

You know the usual Dave character with the mysteriously charming aura? Yes, he was casted perfectly for the role of a biker dude who can earn thousands of followers by running half-naked through a store and getting away with it. Imagine Now You See Me Dave Franco with more cheesiness at the limelight.

This is not your average movie with an in-depth explanation of the character’s life. Missing a single line will make you feel kinda lost halfway through the movie. From being a person hiding behind the camera to an instant social media hit (or so it seems), Vee’s about to turn her life upside down within a day – so you better catch up!

Tip: Listen carefully to tidbits about Vee’s brother and Ian’s ultimate dare during the previous year. Missing out these parts will leave you confused.

5. Which leads to a whirlwind romance

Don’t cringe at that 24-hour romance too; it happens in real life! What more when you meet someone who makes you feel that you’re in control of your life and literally sweeps you off your feet for the very first time. And as far as I know, most of the “watchers” (of the movie) approve of the Dave-Emma pairing. We’re looking forward to see more movies featuring these two millennial favorites.

And we love seeing the impossible seem possible. An online game without servers because every player is an instant server? Coming up with ways to wipe off an anonymous community? People putting other people’s lives in danger for the sake of entertainment? Not to mention the paparazzis on the lookout for players 24/7! I know some part of you is itching to see a real-life app like this.

7. You need a lot of Nerve to keep your eyes open

Although the heart-stopping scenes aren’t that many, not knowing if this movie contains bloody scenes will leave you at the edge of your seats. Who knows, that guy might fall off the building or get shredded to bits by a passing train.

8. We all have that one friend

The main group’s complete – the pseudo boyfriend who needs some DTR (define the relationship) or just has parental instincts, the well-loved cheerleader/ the leader of the group, the sidekick of the leader, the shadow, and that other friend who doesn’t do much. Here you can also find the risk-takers, the underdog-turned-alpha, the computer geeks/ hackers who can code their way through life, the “watchers”, the adrenaline junkies, and that one friend whom your mom always turns to when you’re nowhere to be found. Know anyone like that?

9. Sums up our tech-driven life 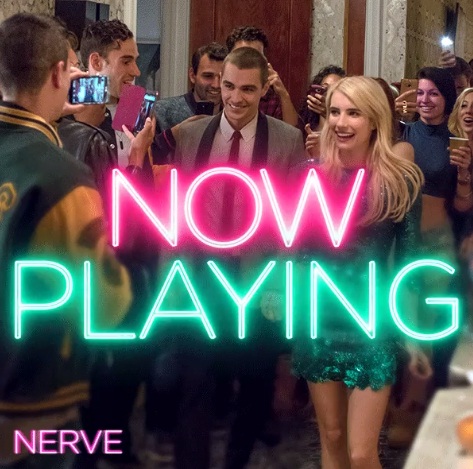 From the constant need to feel in control, getting tired of being a mere “shadow”, wanting to break out from the comfort zone, finding a person we’d like to share our life with in an instant, having a thirst for “followers” or “watchers” to feel socially acceptable in the online community, and everything in between – it’s all packed in this movie.

Like real-life situations with the constant “what ifs” at the end, don’t expect an acceptable closure from this movie. The ending’s okay but it will make you say “that’s it?”. (You’ve been warned.)

Watch it for entertainment’s sake. You won’t regret it given the very millennial environment, relatable scenarios, crazy dares, and all the awesome graphics from Lionsgate Movies. However, there are downsides to this movie: Minus one for the lack of depth in the characters, given that everything is happening so fast. Don’t watch this if you’re a sucker for movies that will make you feel so attached to the main pair. Minus one for the scenes that weren’t explained properly – but would have been better if they did (Like how the hacking was done. That would have been a bomb.). Minus one to the ending because it feels like I’ve been left hanging to want for more. Lacks a handful of things but yes, it’s entertaining. The presence of Dave and Emma are enough for a fan like me.

Want to know what else we’re watching this month? Take a look at our end-of-July watch list here.

(All images are from Lionsgate Movies’ ‘Nerve’ (2016) and official ‘Nerve’ Facebook page.)

4 Replies to “10 reasons why millennials will love watching ‘Nerve’”